The most popular residential area

The most popular area for military families

MaboriKaigan is a 13-minutes driving from the main gate of Yokosuka U.S. Naval Base.
Maborikaigan is located in the eastern part of Yokosuka City, and is divided into 1-chome to 4-chome from west to east. Since the 1970s, houses and apartments have been built here, and now there are 2,000 families. Most of the residents are Japanese, but it is very popular with single military and families of military and single civilian and families of civilian from the Yokosuka U.S. Naval Base.
The reasons for its popularity are
Two parking spaces are provided. Have a garden for BBQ
There is Spacing between the houses.
walking distance to KQ MABORIKAIGAN station and flat.
Easy commute from main gate, Close to the supermarkets, Close to the Ocean, Close to the restaurants , There are parks kids can play
Iino Real Estate has been proposing buildings to owners for over 15 years while researching buildings that Americans would like.
In the area of Maborikaigan, we are having old houses rebuilt into new large Houses.
This is the kind of property we supply. It is becoming increasingly difficult to find a place to live after moving out, as many of the tenants' replacements or friends are still living there. 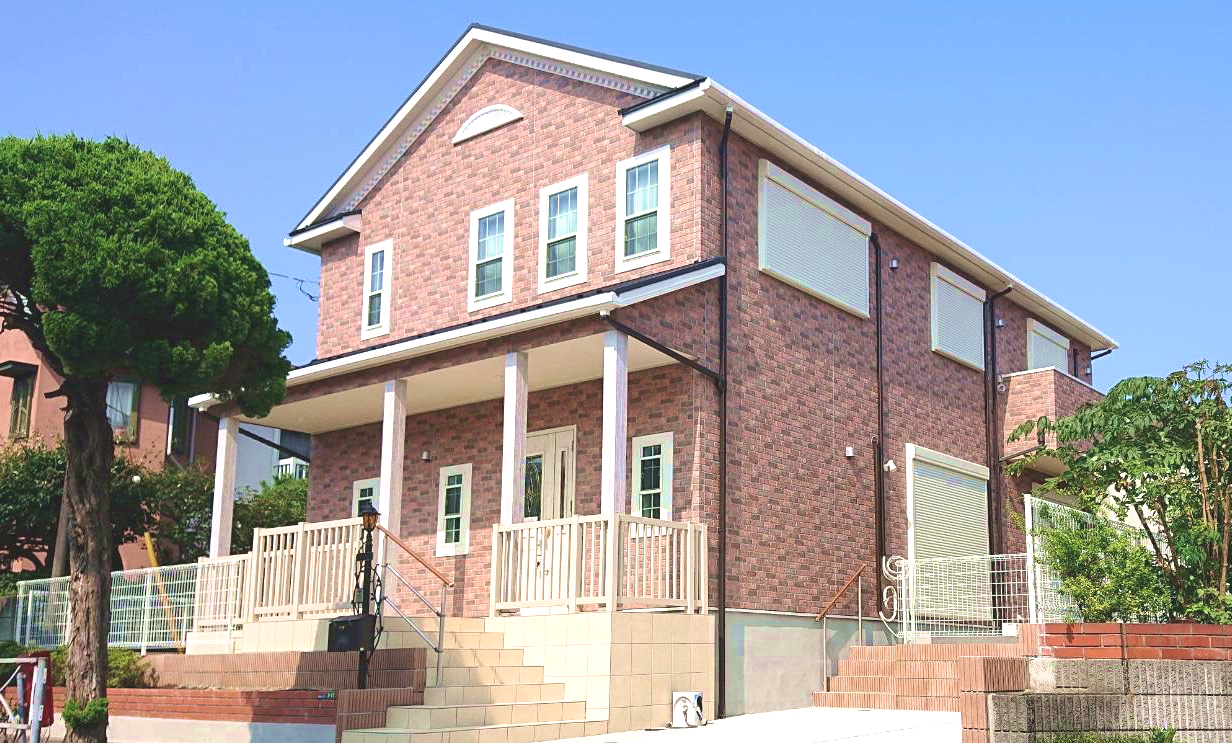 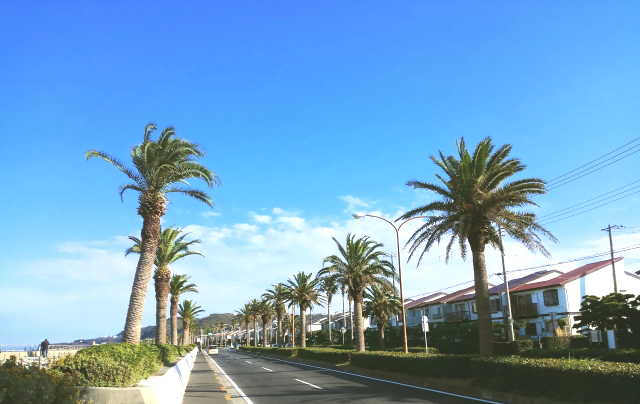 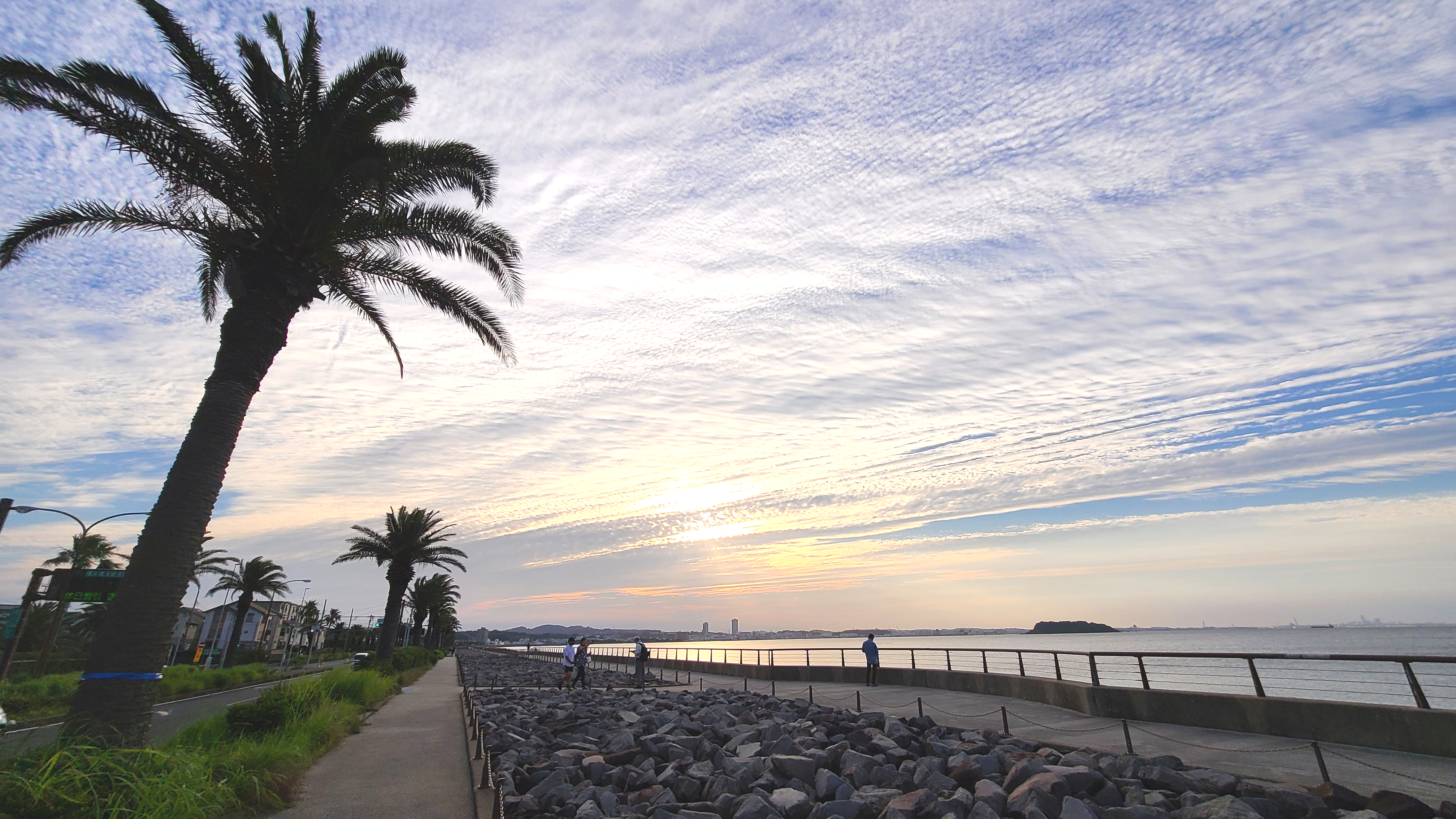 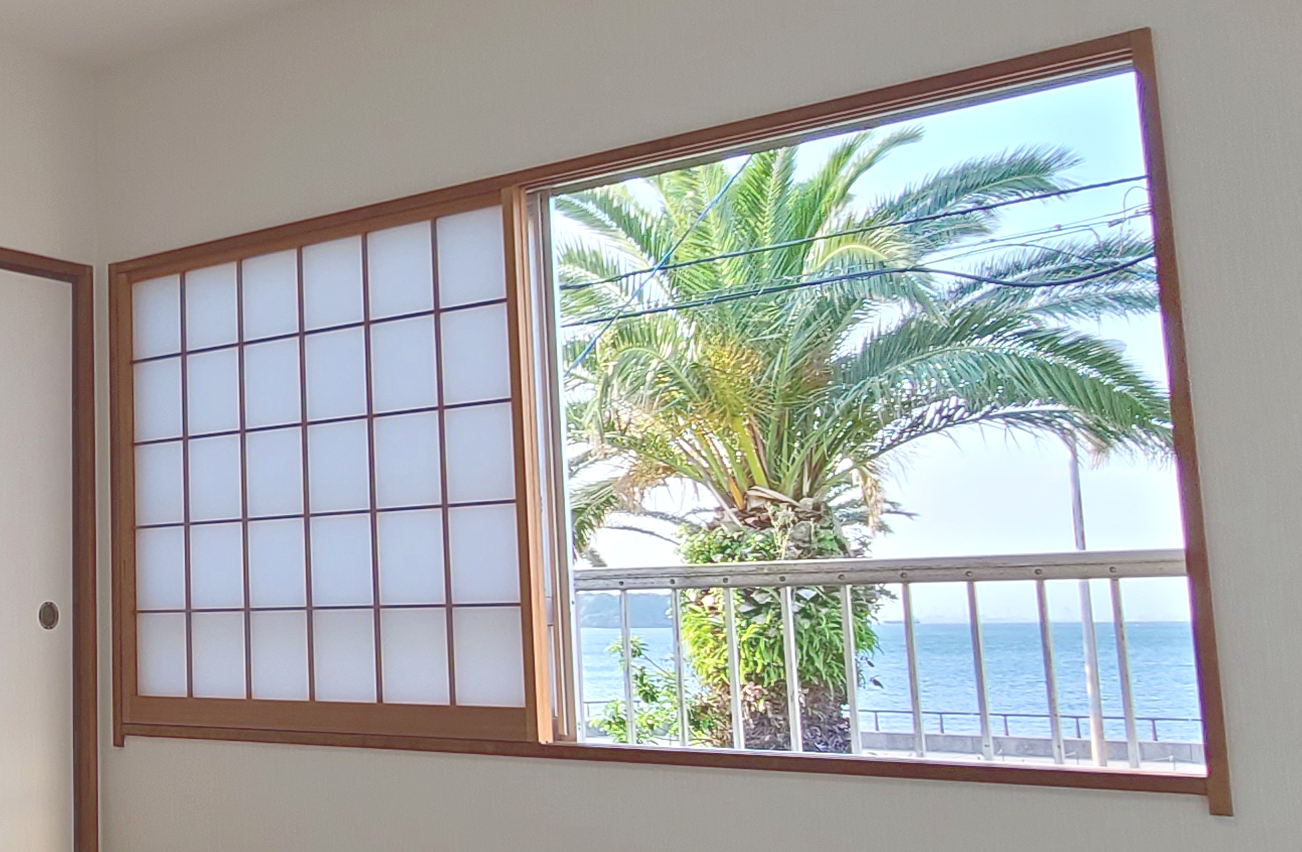 There are also houses in Maborikaigan
where you can see the ocean from inside.

During Halloween, many foreign residences are decorated like haunted house. If you drive around at night, you can see many buildings lit up.
With the help of the residents, children can be seen dressed in costumes and trick-or-treating in the residential areas.
There are many detached houses that are decorated for Christmas, as if each tenant is competing with the other.
The road along the coast of Maborikaigan is called the Coastal Promenade, and there are about 80 palm trees planted along the 1,800-meter stretch.
It gives the impression of San Diego in the U.S. and is very popular among Americans.
Along the coast street, there is a promenade that was completed in 2006, and you can see many people walking around with their dogs on weekdays and weekends.
On the other side of the coast, you can see the center of Yokosuka, Sarushima (Monkey island), Yokohama, the bay of Tokyo, Sky Tree, and if the weather is good in the evening, if you look toward the center from along the coast, you can see the sunset with Mt Fuji.
Maborikaigan has a good living environment that is in harmony with the surrounding urban environment, and there is a lot of greenery mixed in. There is a single green road in the residences of MaboriKaigan, which has been selected as one of the top 100 scenic spots in Yokosuka City.

A view of the built-up residential area at Maborikaigan 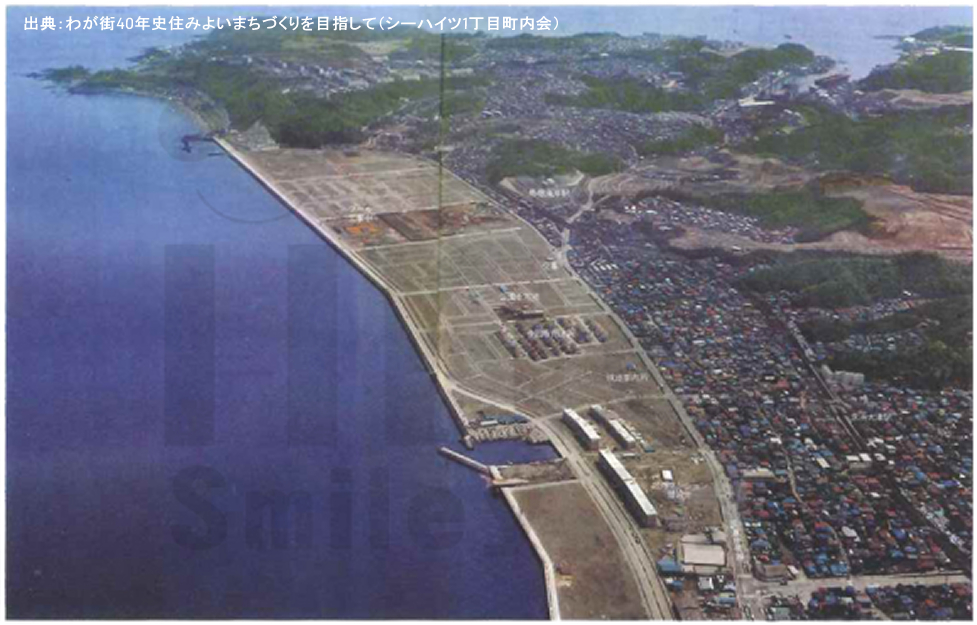 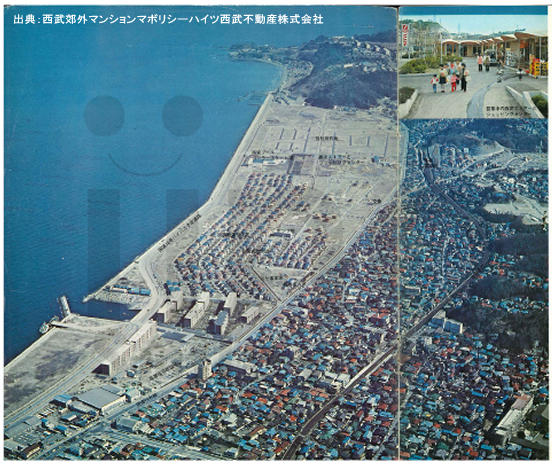 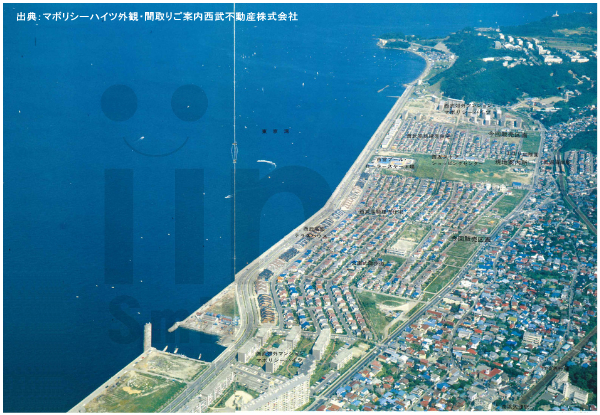 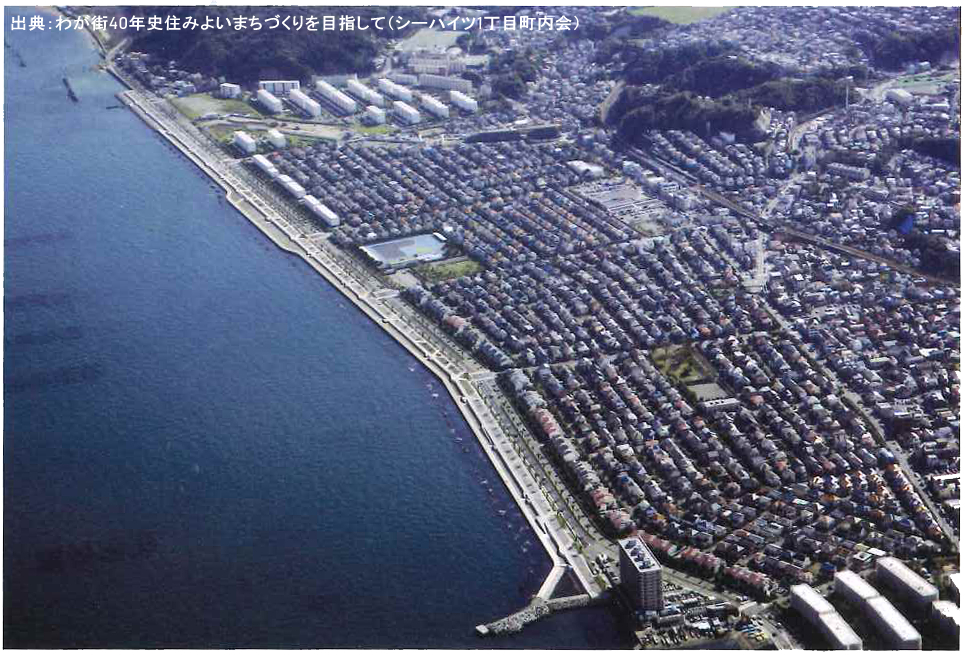 Mabori Kaigan, a town with history 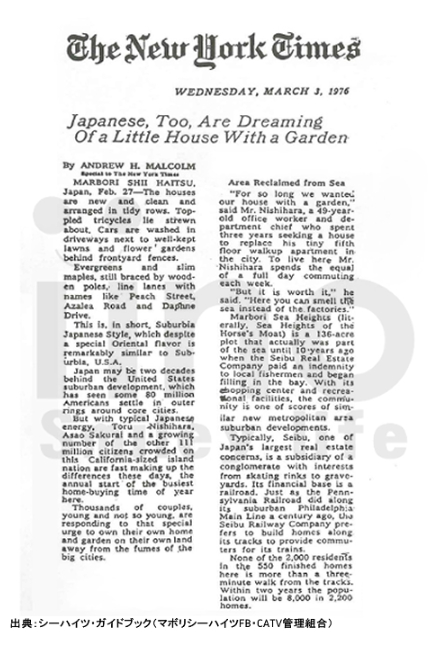 Mabori Kaigan is a historic residential area that was once featured in an article in the New York Times on March 3, 1976.
During the period of rapid economic growth in Japan, many families focused on the development of housing in order to acquire their own homes.
There was such a movement in Yokosuka as well, and in 1973, houses were built on land reclaimed from the Mabori Beach bathing beach of the time, and were sold under the brand name "Mabori Sea Heights Luxury Housing".
It has a large plot of land and is beautifully landscaped with flower beds planted with azaleas and camellias facing the road, very similar to a suburban residential area in the United States. 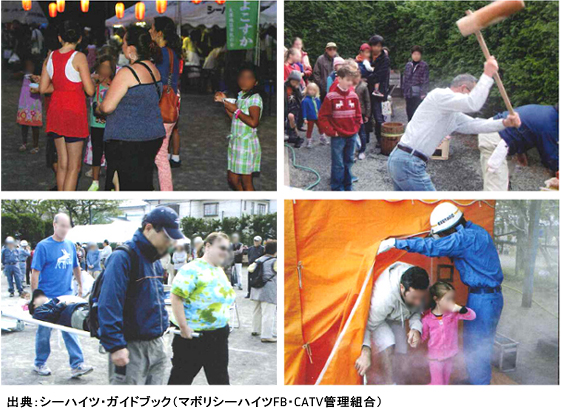 In Mabori Kaigan 1-chome, 15% of all households are single military personnel and military families from the Yokosuka U.S. Naval Base and single military personnel and military families. It's a special area that can't be found anywhere else in Japan, where many people from overseas live. For this reason, the residents of the neighborhood association have formed an "International Friendship Group (KOKUSAI-YUUKOU-BUKAI)" to introduce Japanese culture and events to the Americans, and to make their lives here more comfortable.
If you are planning to live in Mabori kaigan, why don't you participate in the summer festival, rice cake making event, and disaster drills and enjoy living in Japan?

The beginning of Iino Real Estate was also in "Mabori Kaigan" 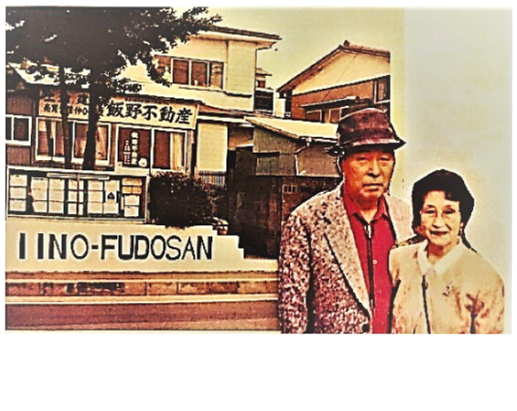 It was in 1971 that I opened a small real estate office, Iino Fudosan, in Mabori Kaigan. Initially, our office was located in front of the post office adjacent to the site.
At the time of opening, the three members of the family, the founder, his wife, and their daughter, were mainly engaged in rental agency management.
At that time, Iino Real Estate started to handle "base contract" which was not yet a major business in the world. However, at that time, many people were more worried about renting out their houses to foreigners than they are now, and for a long time, there was a shortage of properties for customers who wanted to rent. Therefore, we persevered and continued to search for base rental properties mainly in high-end residential areas such as Mabori kaigan, and gradually increased the number of properties available for lease. We have now relocated our offices to Hinode-cho and Dobuita-dori. Currently, more than 400 groups of people related to the U.S. Navy in Japan visit our office every year, and we are continuously striving to supply high quality properties and provide the best service possible. 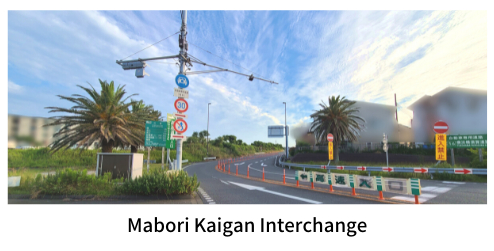 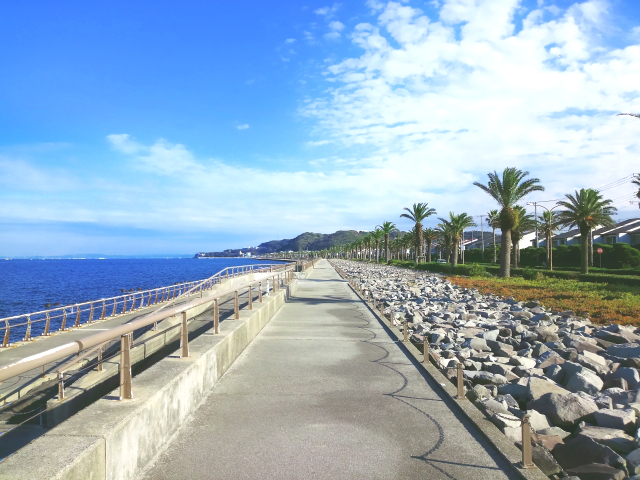 It is a 1,650-meter long, 9.9-billion-yen seawall with a surface protection system that combines protection functions with use and environment.
This trail, commonly known as Mabochoku, is one of the most sacred places for running in the Tokyo metropolitan area. If the weather is good, you can even see Mt. The palm trees planted along the path create an exotic atmosphere, and you can enjoy jogging or walking while feeling the sea breeze. 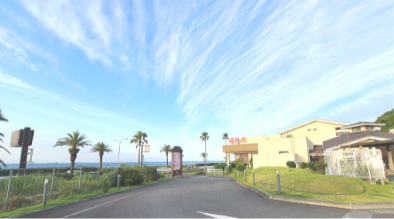 Near the Maborikaigan, there is a hot spring resort called Yura no Sato (Hot spring) and SPASSO, which is run by the Kannonzaki Keikyu Hotel.
Both have open-air baths with a panoramic view of Tokyo Bay. Yura no Sato has indoor baths, rock baths, and a restaurant, and is crowded on weekdays and holidays.
You also have to pay an entrance fee to use the restaurant.
SPASSO has an age restriction to enter the museum, so you can enjoy your adult time slowly.
Entrance fee (tax included)
Rental bath towel and face towel included 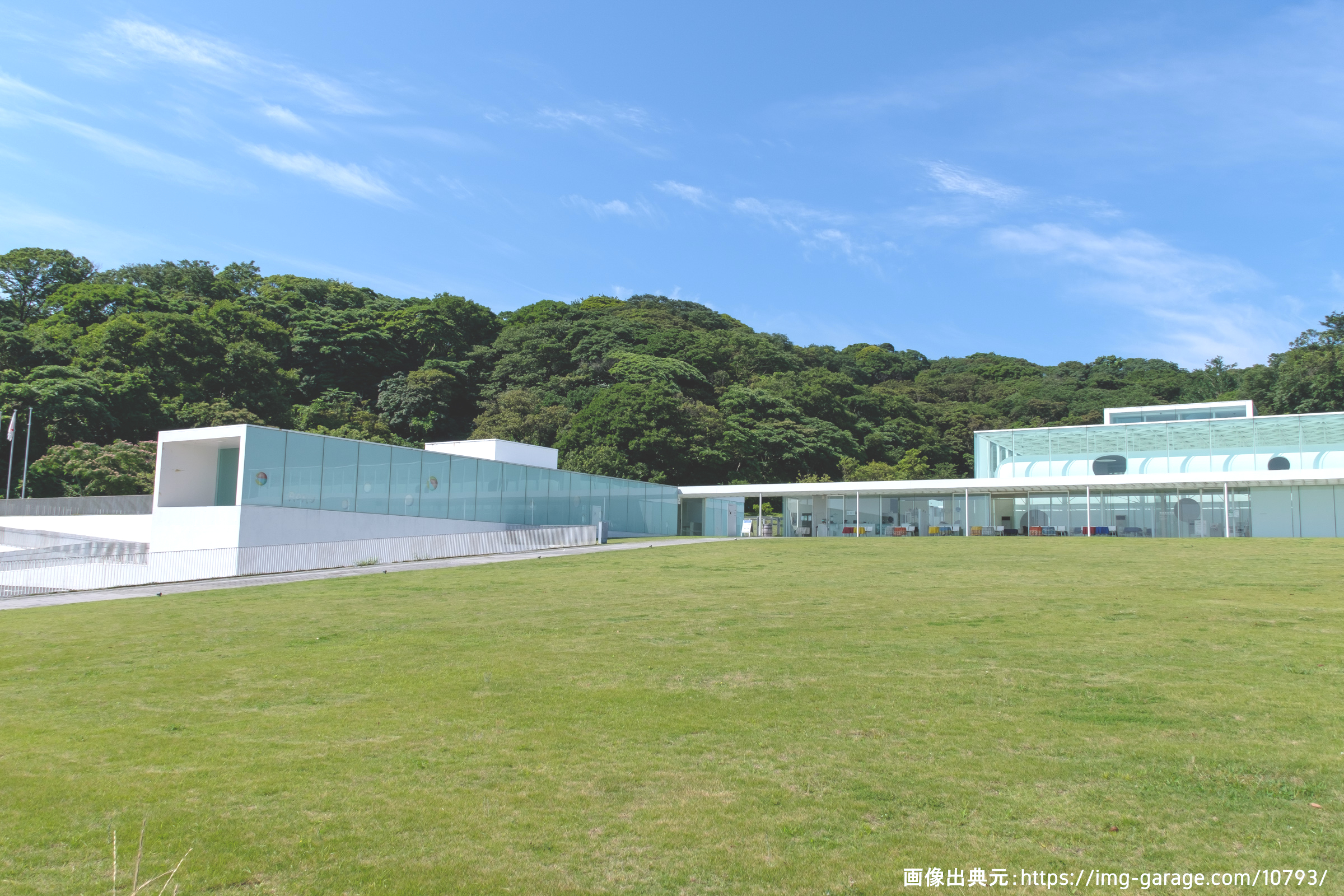 The Yokosuka Museum of Art, established to commemorate the 100th anniversary of Yokosuka City, exhibits a variety of things.
The museum has a collection of about 5,000 pieces of modern and contemporary Japanese art, including works by artists associated with Yokosuka and the Miura Peninsula, and works depicting the sea.
The museum has a restaurant, ACQUAMARE, where you can dine with a view of the sea.
You can eat pizza, pasta, and other dishes made with seafood and vegetables from the Miura Peninsula.

Residences along the coast✨🏡

A beautiful house on Maborikaigan

House for singles in Maborikaigan

Discover the perfect place to rent explore rentals on iino